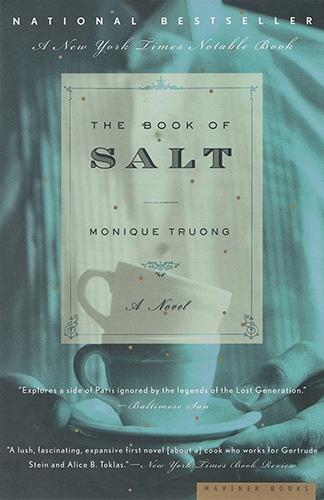 In Paris, in 1934, Bình has accompanied his employers, Gertrude Stein and Alice B. Toklas, to the train station for their departure to America. His own destination is unclear: will he go with “the Steins,” stay in France, or return to his native Vietnam? For five years, he has been the live-in cook at the famous apartment at 27 rue de Fleurus. Before Bình’s decision is revealed, his mesmerizing narrative catapults us back to his youth in French-colonized Vietnam, his years as a galley hand at sea, and his days turning out fragrant repasts for the doyennes of the Lost Generation.

In The Book of Salt, Bình knows far more than the contents of the Steins’ pantry: he knows their routines and intimacies, their manipulations and follies. With wry insight, he views Stein and Toklas ensconced in blissful domesticity. But is Bình’s account reliable? A lost soul, he is a late-night habitué of the Paris demimonde, an exile and an alien, a man of musings and memories, and, possibly, lies.

Elegant, witty, intricate, and richly imagined, Monique Truong’s Book of Salt is—dare I say it?—a delicious and deeply satisfying novel. Truong’s stellar cast of characters includes Gertrude Stein and Alice B. Toklas, artsy American divas living privileged, glamorous lives in Paris. But her story belongs to Binh, their Vietnamese live-in cook, a stoic young man of many secrets. Binh is the narrator, the anguished soul at the center of this sensual and ironic tale of love, loss, passion, exile, and identity.

A fascinating, original, and sharply written story with vivid insights into the world of cooking.

An exquisitely rendered work of a tone-perfect imagination. The Book of Salt is made to be devoured in a single night—a rare and genuine pleasure.

Deftly orchestrated, wantonly alive . . . If this is what Truong can do the first time out, there’s no telling what she’ll pull off next.