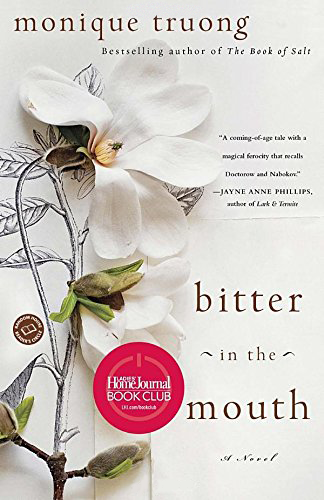 Growing up in the small town of Boiling Springs, North Carolina, in the 70s and 80s, Linda Hammerick believes that she is profoundly different from everyone else, including the members of her own family. For as long as she can remember, Linda can “taste” words. In this and other ways, her body is a mystery to her. With the help of her great-uncle Harper, who loves her and loves to dance, and her best friend Kelly, with whom Linda exchanges almost daily letters though they live only streets away from each other, Linda makes her way through a girlhood haunted by these incantatory last words that her grandmother says to her: “What I know about you, little girl, would break you in two.”

When a family tragedy compels Linda, now a thirty-year-old woman, to return to Boiling Springs, she uncovers the startling story of her life. Bitter in the Mouth is a story that questions what it means to be a family and to be a friend, to be foreign and to be familiar, and to be connected and disconnected from our bodies, our past, and our histories.

Monique Truong’s Bitter in the Mouth, every word a taste, is a revelation of wit and heart and stunning talent. One South to another, Truong invents Americana for a new America: from Great Uncle Harper to Dr Pepper and the Wright Brothers, she shades her classic coming of age tale with a magical ferocity that recalls Doctorow and Nabokov. Bitter In The Mouth is a soulful hymn to the hands we fashion with the cards we’re dealt.

Monique Truong creates a world so subtle, mysterious, moving and sensory that it heightens our consciousness of those qualities in our own. Bitter in the Mouth is the rare novel that makes one life story unique and universal at the same time.

Be prepared for a full range of tastes of life in Bitter in the Mouth: friendship, loyalty, love, family, and above all, the mysteries at every corner of one’s history that make us who we are. Monique Truong is a great observer and a beautiful writer.

—American Academy of Arts and Letters

Bitter in the Mouth is a novel full of unexpected twists and turns. Every time one thinks that Monique Truong has exhausted her material, the family drama, she reveals something surprising yet inevitable, some information that colors the way the reader sees the novel, casting it in an entirely new way.

… a stunning, brave work of fiction that should not be missed.

[A] book where carefully hidden letters, secret photographs and tightly folded notes seem to fall out of the pages, Linda’s search for her lost past follows a mystery-lover’s trail of clues.

After an opening that feels like pure Southern Gothic, complete with an emotionally withholding mom and a gay great-uncle who could be channeling Tennessee Williams, Truong wields her narrative like a quarterstaff, knocking readers’ expectations right out from under them.

In rollicking, dead-on prose, award-winning author Monique Truong takes us on a taste tour of the South and her life….

[Y]ou’ll bask in the glow of her character construction and her dazzling prose. You’ll be lead inexorably to a moving and fitting novelistic conclusion. Oh, and I’m quite sure the book will make you hungry, so be prepared to have some snacks prepared as you get reading.

[A] Gothic Southern allegory of family secrets and lies, leading up to a bombshell that Linda drops on page 158. Of course, Linda and Truong prepare us for this. Linda’s dying grandmother, a bitter woman known as the only relative to tell the truth, tells her, ‘What I know about you, little, girl, would break you in two.’

The southern Gothic is a form that has a wider range than one might suspect, and Monique Truong mines that range with gorgeous language, rich characters and a wonderfully complex plot that upends not just our vision of her novel but of language as well.

[A]n ambitious and poignant meditation on how to define your true essence, a compelling assertion that individual will can trump biological and geographical destinies.’

[A] moving story about how different our experiences of the world can be.

Truong’s prose is lovely, conveying a voice that is honest, whip-smart and funny. This must-read book surely belongs among the year’s best literature.

Monique Truong’s Bitter in the Mouth, is a beautifully written, complex story of self-discovery. The narrator, Linda Hammerick, looks back from the vantage point of her 30s to her childhood in a small Southern town, a place where she never felt she belonged. It’s the premise of many coming-of-age stories, but Linda truly was an outsider, for reasons that emerge as her story progresses.

‘One silence had led to another, and eventually the silences became the life preservers dotting the dangerous ocean between them,’ Linda says of one of the secrets held fast by the novel’s richly drawn characters. Truong explores — and explodes — these secrets at a captivating pace.

Invoking the spirit of To Kill A Mockingbird – for many years Linda thinks of her father as Atticus Finch and herself as Scout – Truong cooks up a diverting entertainment about growing up clever rather than pretty. Family secrets, first love and teen betrayals all make up the novel’s classic menu, though Linda’s unusual taste buds inject a startling poetry into the mix.

‘A family narrative should begin with love,’ Monique Truong’s gifted, wounded heroine ruefully acknowledges. A searing exploration of intimacy and enmity, language, betrayal, and silence, Bitter in the Mouth is as dazzling as it is deeply emotional. It also has the best twist in its tail–ever.

Synaesthesia has featured in several novels in recent years, but in none has its treatment been so convincing. Bitter In The Mouth is — inevitably — a mouthwateringly delicious read; it also snaps with irresistible wit. This could have remained a slender coming-of- age tale. In fact, it develops into one of real substance.

A deeply compassionate and artfully crafted novel about being foreign and family at the same time — by the writer whose debut, The Book of Salt , swept us away.

Truong’s bone is the outsider’s plight, and her pen is a scalpel, laying perfect words down along that nerve until even the happiest reader understands what it means to forever stand apart from your family and the larger society you inhabit.

This fast-moving and beautifully strange second novel from Truong—whose The Book of Salt swept various 2003 literary awards—paints the portrait of an intelligent, observant girl who never quite fits in and doesn’t quite understand why until she leaves home for many years as a young adult and then returns to discover her roots.

Southern cadences resonate, imbuing Bitter In The Mouth with a warmth and wit that form a perfect foil for the Southern gothic undercurrents that propel it towards its gorgeous, heart-warming resolution.

Truong’s absorbing second novel, following The Book of Salt (2003), introduces Linda Hammerick of Boiling Springs, North Carolina…. Truong is a gifted storyteller, and in this quietly powerful novel she has created a compelling and unique character.

—Publishers Weekly (starred review and Pick of the Week)